Since the madness in Slovakia I’ve gone a bit quiet on the place-based blogging. I’ve moaned about how bad the Garmin Vector 3 pedals are, rewritten my Touring Tubeless article, and talked a lot about reforestation. Let’s talk about Austria, Slovenia, and Hungary.

Vienna is stunning. I got in bed for a whole day, did a bunch of chores, toured every single bike shop in town, hit a work deadline, found some aero bars, then smashed off to the mountains to kill time whilst waiting for my new tent.

Austrian Alps are just as pretty as the Swiss Alps, but luckily coming in from that side a biiiit smaller. I climbed up 800m, most of which was reasonable road, but some of which was 16% and literally a field.

I picked up a new SRAM Force22 rear derailleur (recommend 👍) from an Amazon Pickup point in Vienna (recommend 👍), and been carrying it around hoping to find somebody to fit it. The nonsense 50/34-11/30 with 38lb on the back was not what I needed to get up that field, and the next day I muddled my way up and over the Pfaffensattel pass being chased by a hangry swarm of mosquitos.

Another problem appeared: my crank arm was tapping into the front derailleur. I tried carefully bending it back but was too scared to destroy it, so just mostly rolled down the hill, unable to get into the big ring.

I took another rest day because I had time to kill before the new tent got to Slovenia, and it was pretty, cheap, and folks at Hotel Gasthof Paunger were real friendly.

Next day I set off for the best looking bike shop in south east Austria: Bernhard Schmuck. They were set to close at midday, and I rock up at 11:40am. I think I’m being the biggest asshoke but they absolutely didn’t care. The guy fit my rear derailleur, sorted out the front derailleur, and whilst he was doing all that I decided that the Garmin Vector pedals can just piss off. Screw it, cross is coming.

They had some tasty Specialized ratchet jobies to match.

They did everything in 20 minutes, gave me snacks, gels, refilled my water bottles, offered me a beer, and sent me off with a 15% discount! Love those folks.

I set off for the Slovenian border, literally laughing out loud with joy, fucking around through farmers fields and feeling pretty indestructible. Then I had a bit of a wobble, after my first “aero bars + rain + panniers = near death?” experience.

Bit of a morning! pic.twitter.com/aYCgTK4g5T

One moment I was smashing along the road with the first tailwind in months, then I heard something and looked over my shoulder, then the front wheel was doing its own thing, my hands were in the air, and … then im riding my bike perfectly normally, hands on the hoods, with no clue how I got there. Fucking terrifying. I figured I should probably take a moment to catch my breath, then AHHH A FUCKING SNAKE IS COMING RIGHT AT ME. 🤣

Like a lot of borders in Europe there is a fuck-off climb between Austria and Slovenia in the north east, all of which is stunning. I was using Komoot and it had me going through all sorts of nonsense, passing through farm lanes and actual farm courtyards, along canal paths, and just all good gravel fun. I couldn’t be happier with it all, because despite pissing it down with rain.

My hotel was spectacularly baller. “The pool is out back” they said… 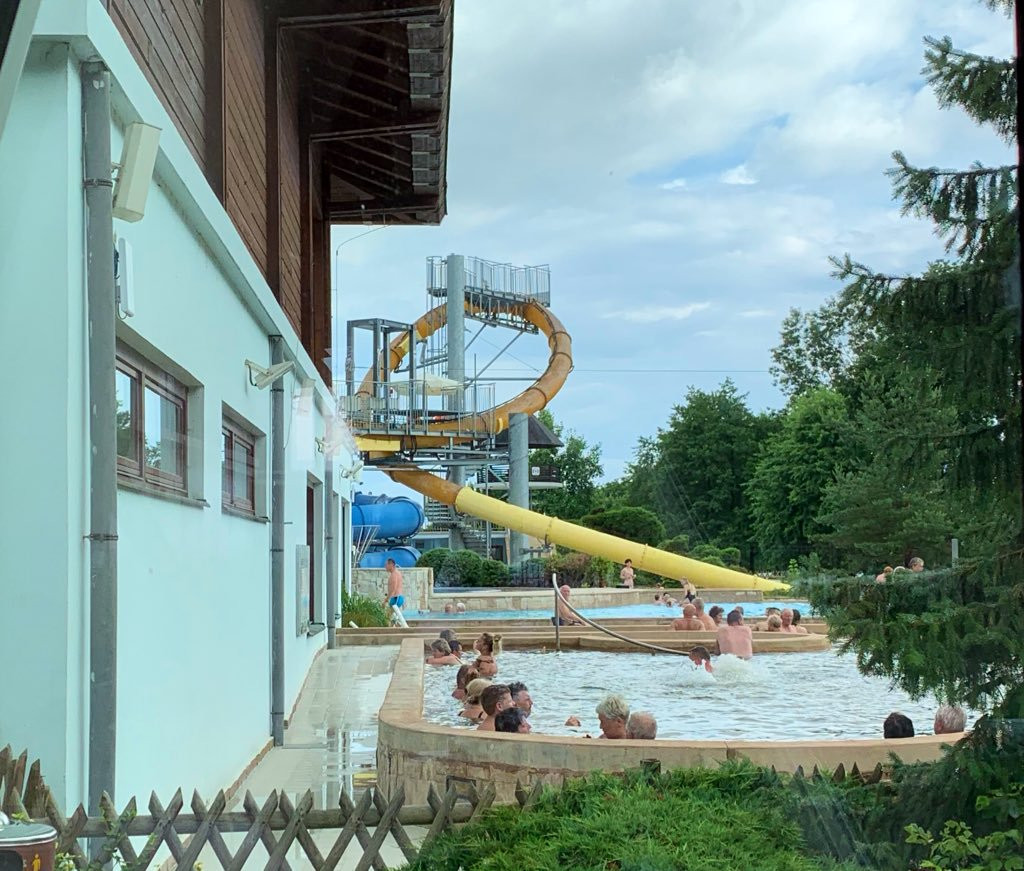 It turns out Slovenians are pretty serious about their water parks, and did I pick an awesome place to wait for my tent. The next day I checked out, and jumped the turn-style to hang out in the pool until the DHL delivery man showed up. That yellow slide… good lord.

He showed up at about 2pm, then I set off for Hungary.

To make up for all the arsing about in Austria waiting for this tent, and so I could hit my Croatia deadline (boat stuff) I put in a serious day on the bike. I covered 174km with my bags the heaviest they’ve ever been, and it was brutal.

Hungary is a wonderful country with many amazing places to visit, but I did not start off in any of them. I was going through small villages in the south west, with beat up old cars rusting everywhere, kids running around in the street barefoot, and skinny dogs roaming around. That in itself was ok, the kids were really excited to see me riding by and ran along after me shouting stuff out which was heart warming, and I saved a turtle from going under a truck!

In more positive news I rescued a turtle from going under a truck. pic.twitter.com/1Ts3v6sJ2E

What sucked was seeing a dead cyclist in probably the 2nd or 3rd town, only 50km in. It spun me out really hard. There was a blanket over half of him, and from what I could see it was an old man on an old bike, which had been T-boned by a car. The bike was bent back in half on itself so it seems like the car had pulled out and just folded the man over.

I’ve seen dead bodies before, and I’ve seen cycling accidents before, but there was something extra gutting about this situation. As a “westerner”, every Eastern European country I go into is a mental battle against the stupid negative stereotypes movies and TV has put into my brain. These stereotypes are always washed away by the awesome reality of that place, but after seeing a fellow cyclist run over, I was thinking “Ok no, this is the one. This is a bad one.”

It’s dumb. Accidents happen everywhere. The NYC bike community had been mourning the loss of two amazing people that week alone, and that’s “the best city in the world”. Maybe that was playing on my mind too, but I was feeling exceptionally vulnerable on the road with a bunch of cars who were not used to bikes. My stomach was turning, and I just felt shaky. Some of this was the heat, some of this was dehydration, so I decided to try and fix that easy stuff first.

A few more miles and I found an ice cream shop with home-made elderflower lemonade, chilled out a bit, did a bit of Twitter therapy, filled up the 2L water bladder, and we were right back on track. 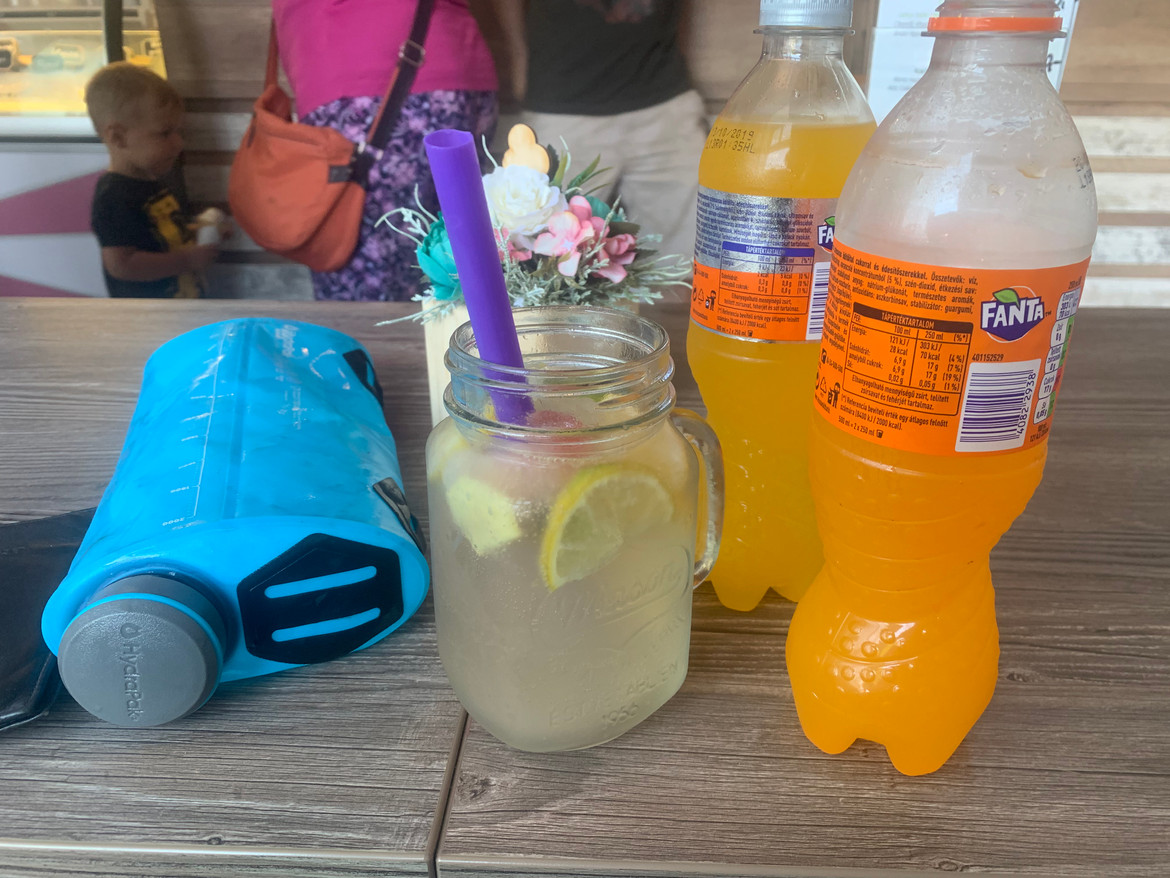 All my cocking about meant it was rather late, and I was not up for camping with all the wild dogs and general fear of death, so I was riding around rural nowhere looking for hotels. The first hotel had been demolished. The second was full. The third was 30km extra and there were two ways to get there.

Went with 2 and gooooood loooooooord I wish I listened. My little bullshit backlight was plugged into my battery pack to keep it going, but that was not really helping the articulated lorries notice an all black rider riding in pitch darkness. Do not recommend. 👎

The was a 5500 calorie day thanks to all the headwinds, and I devastated the only food source left in town at 10:55pm: McDonalds. They were asking everyone else to leave because it was closing, but they didn’t dare disrupt me as I powered through 2 Big Mac Meals, a McChicken Wrap, and 18 chicken nuggets.

Next day was a slow start. It was a working Monday, so I bummed around Kaposvar doing an hours work per cafe, and luckily they have a bunch. The heat was fucking terrible so I was waiting for it to pass, and also looking for some bike help. In the anarchy the day before I bonked my wheel and it needed a bike shop to true it. I found one, and the guy was so nice! None of us spoke a matching language, but he told me I had too much weight on my wheels, which I did after picking up the extra gear, carrying the old pedals, carrying extra water, etc. The bike was nuts.

He trued the wheel, his wife even gave me a coke whilst I waited, then he flat out refused to accept any money. I’d already given him my full-sized toolkit-style steel allen-key set which I absolutely should not have been carrying, so I guess we were even! He gave me a look of pity, like “you’re not gonna make it”, then off I popped to the next town: Pečs.

Getting to Pecs was a lot of climbing. It was all farmland then a beautiful national park, but it was hot and hard work. Luckily the next day I was heading for the Serbian border, and from there it is flat as a pancake, with a ferry in the middle, then an even flatter pancake.

Although the terrain was nice and flat, the temperature was trying to murder everyone. France was getting all the headlines for the 40C+ temperature, but it was bonkers everywhere that week, and Hungary was rough. I was hiding under any sizeable tree I could find every 20-30 minutes, drinking from every water source I could find (thank you Sawyer squeeze filter!), and generally having a struggle.

My struggle ended with an amazing guesthouse: Locomotiv Vendégház. I had unwittingly wandered onto the Euro Velo 6 route, which I found out when I met a bunch of bikepackers there, touring with kids as a group of friends. They were from Canadia and Ireland, and we drank beers, made sangria, ate BBQ, and hung out with the awesome owner of the guesthouse too. Cannot recommend this place enough if you’re floating around the Hungarian/Serbian/Croatian corner. 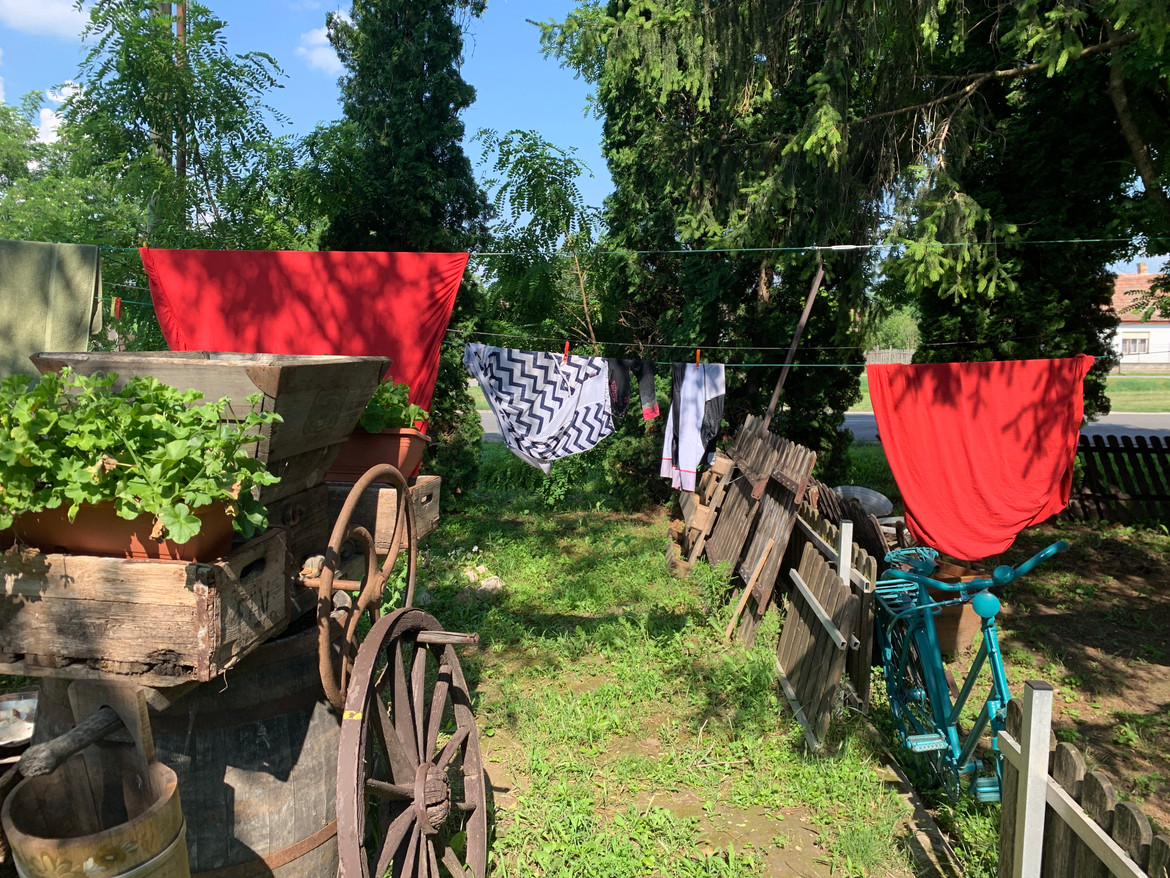 That was a crazy fortnite.

Tubeless in cyclocross and mountain biking these days is pretty much the default, but going tubeless for road is a long frustrating drive on…

It’s not my first time in Serbia, but this was a fantastic experience. I set off from the Hungarian side of the border after having…